Lula was in Conakry, capital of Guinea last Tuesday (22/02/2011). The charismatic and prestigious ex- Brazilian president came for a ceremony about the beginning of the works of Vale in Guinea.

Vale, the largest Brazilian company and the largest exporter of iron ore in the world, is launching a project of 5 Billion Dollars in Guinea. The Simandou Poject includes 2 mining sites, a new port, a train for people and light goods, and railways to transport iron ore. 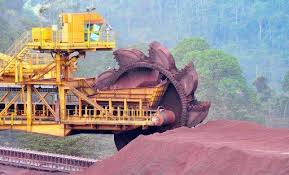 Vale’s CEO, Roger Agnelli, came to Conakry in a private jet with Lula and both stayed at the Novotel in Conakry. Their presence together was an attempt to silence the rumours of Agnelli’s departure because of too much political intervention inside of Vale. The peak of Agnelli’s crisis with the government occurred in 2008 when Vale laid off thousands of workers during the financial crisis.

Agnelli, who became CEO in 2001, achieved incredible results at Vale. In 1997, Vale was privatized with market value of US$ 7 bi, last year it registered US$ 176. Naturally, every time there are rumours that Agnelli will leave, the stock prices of the mining giant suffer.

To understand the power that the government has over Vale we need to partially answer the question: Who owns Vale?

53% of Vale’s voting shares are owned by Valepar, a holding that has 48,79% of its shares in the hands of three federal companies (Previ, Funcef, and Petros) and Funadtion Cesp from Sao Paulo. The rest of the shares of Valepar are held by :21% by Bradesco, 18 % by the Japanese Mitsui and 11,5 by BNDESPar. Nonetheless, an agreement guarantees that Bradesco (a Brazilian bank) controls the executive gestation of Vale to make sure that the company is not under state orientation.

One thought on “Lula in Guinea Conakry to support Vale”