Posted on November 15, 2011 by Hildete Vodopives

It is probably true that China is the luxury industry’s new El Dorado. But Brazilian millionaires and middle class are busting a market expected to grow 33% in sales in 2011. Traditional fashion icons such as Hermes and Rolls-Royce are setting foot in the tropics. So is Coach, the American shoe, handbag and accessories maker.

In São Paulo, an event promoted by the IHT (International Herald Tribune), the international arm of the American newspaper The New York Times, draws international attention to a R $ 15.7 billion market. The event is called the Sao Paulo Hot Luxury.

A recent study by Bain & Co predicts that luxury sales in the Americas for 2011 will grow 8%. The U.S. will remain the largest market for luxury goods in the world. China will see 25% year after year, growing from this year, putting Greater China (including Hong Kong, Macao and Taiwan) in a strong position to exceed sales in Japan for the first time.

The study also predicts that growth in emerging markets will continue to be the focus of the manufacturers of luxury for the next two to three years. Changes in lifestyle have driven a return on sales of luxury goods in Russia (50 to 10% annual growth). The opening of new stores will boost growth in the Middle East (10 to 12%), while Brazil will be the scene of heavy investment of international brands (10 to 15%).

The Bain study concludes with a look ahead and beyond 2014, an estimated 214 to 221 billion euros to the market in three years, and stress the focus on emerging markets, deep penetration, route-to-market and a tailored value proposition. 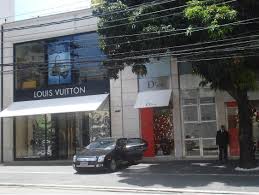 Louis Vuitton also announced that they will accelerate its expansion in the country. In 2012, the French fashion house will open three new stores. “Over the past two years, we feel that the Brazilian economy really took off. This gives us the willingness to invest,”  President of Louis Vuitton, Yves Carcelle declared to Jornal Valor. He also said that tourists from emerging countries contribute in part to increased sales in mature markets. They are solely responsible for this growth.

Last year, Diane von Furstenberg declared in Style.com that  “of all countries, the future looks best in Brazil.

Michele Obama wears Diana's creations in her trip to Brazil

” Brazilian women love everything—and they don’t care about cost!”  Now she adds: “If Brazilians could put their joie de vivre into a bottle, it would be bigger than Coca-Cola.”

Hildete de Moraes Vodopives is founder of Brazil Global and of the Harvard Strategists Group. She is a fellow researcher of the Centre Roland Mousnier at the Sorbonne University and a member of the Brazilian Investment Analysts Association (APIMEC-Rio), where she served as Corporate Relations Director and later, on the board. Hildete advises companies and investment agencies in international business development.
View all posts by Hildete Vodopives →
This entry was posted in Brazil, Business, Event, Life and tagged Coach, Coachs, Hermes, HNW, Louis Vuitton, luxury, Michelle Obama, milionaire. Bookmark the permalink.