“In order for the Brazilian economy to grow around 5 per cent per year in the next few years, Brazil needs to add 5,000 megawatts per year to its installed capacity” said Mauricio Tolmasquim, of the Brazilian government’s Energy Research Company in an article last week in the Financial Times.

What is the solution?

$11bn Belo Monte dam, which the new government of President Dilma Rousseff wants to build on the river Xingu, one of the Amazon’s biggest tributaries.

Obviously, there are many environmentalists who are against it. Some are very famous, like James Cameron, director of Avatar , or Bianca Jagger. Others are very exotic, like the 50-60 Amazonian Indian tribal leaders, some in traditional dress, who gathered outside the offices of BNDES in London last Wednesday (02/04/11).

Protesters argue that Belo Monte will destroy the livelihoods of people living beside the Xingu. It will flood 516 sq km (201 sq miles) and will lower the river’s level as it passes between two indigenous reservations. 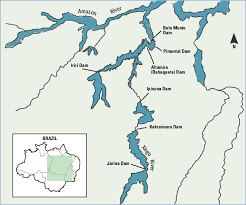 The 11,200MW dam would help keep up Brazil’s standing as one of the few large economies that are powered by sustainable energy.

By the way, Brazil’s power comes 90 per cent from renewable sources compared with 18 per cent for the world average.

The dam could also suffer from irregular rainfall, such as the drought presently afflicting the Amazon. Opponents say it will only be able to produce at full capacity for three months of the year. Instead, they state the government should build smaller, less disruptive hydroelectric projects.

Mr Tolmasquim, president of  Brazil’s Energy Research Company said Belo Monte would generate about 40 per cent of capacity – below Brazil’s average of 55 per cent – only  because of environmental concerns.

Environmentalists are also worried the project will attract nearly 100,000 outsiders – migrant workers and their families, which will lead to conflict with indigenous communities.

The government counters that the investors are planning to invest $3.3bn as “social and environmental compensation” in the area and see the migrant workers as a good way of developing local economy.