Gringos (Portuguese slang for foreigners) still have strong stereotypes about Brazilian people. The three most common may still be: great footballers, samba dancers, and beautiful women. The average Brazilian is perceived as someone very attractive, easygoing, and who loves to party. In short: friendly people who mix everyday reality with joy. 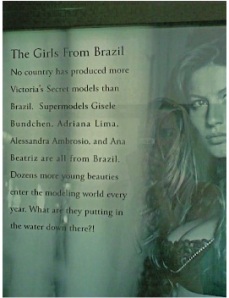 This advertisement by Victoria’s Secret illustrates very well one stereotype about Brazilian women. Nonetheless, does it provoke sexual tourism ?

Tourism in Brazil is booming. However, it is hard to reap the benefits of tourism and avoid sex tourism.

In an article about the realities of sexual tourism in Rio de Janeiro, Chris Rogers, the adventurous BBC Reporter, states that “Brazil is overtaking Thailand as the main destination for sex tourism.” (Brazil’s sex tourism boom).

I was raised in Sao Paulo, which is the financial capital of Brazil and not a touristic destination. At least for Paulistanos (people born in the city of Sao Paulo) sexual tourism is not a hot topic. In fact, it was not either for any of the candidates during the presidential elections.

In Sao Paulo, unless you look for it, you don’t see sexual tourism or under aged prostitution. However, after hearing about the reality in Fortaleza, I felt obliged to write this post. According to friends, sex tourists are omnipresent in Fortaleza, one of those paradise-like beaches in the northeast of Brazil. They said it is common to see white/caucasian gringos in their 40s  walking around holding hands with underage Brazilians in the touristic old center of the city or in the beach. There is a touristic night club where people dance Forro (a local music) called Piratas, which is known for having “the best Monday party in the world.” There, they found the highest concentration of foreigners with underage Brazilians prostitutes. In Fortaleza, state capital with population of 3.4 million,  there is also a street full of prostitutes. Okay, no big deal, even in Paris you can find a street like that (near Stalingrad in case you are curious). But in the capital of the state of Ceara and 4th largest city in Brazil, virtually all the girls in the red light district are under 15.

I am confident that the government will do some sort of clean-up operation before the World Cup, since Fortaleza is a hosting city. Nonetheless, I wonder about what sustainable action could be taken to tackle sexual tourism and child prostitution.

Any ideas about how the government should fight against sexual tourism and child prostitution ? Comments welcome!

Ricardo was born and raised in Brazil but also has Italian citizenship. He holds a bachelor’s degree in business management from Fairleigh Dickinson University. This erratic blogger is a master candidate in Paris at ESCP-Europe, but presently in a gap semester. He speaks five languages and has worked as project manager for Bolloré Group in Guinea Conakry, West Africa and as agricultural commodities trader for Noble Group in Switzerland, Hong Kong, Argentina, Paraguay, Uruguay and Brazil.
View all posts by Ricardo Geromel →
This entry was posted in Article review, Brazil, Life and tagged BBC, Brazil, Chris Rogers, Fortaleza, Paulistano, Rio de Janeiro, sex tourism, Victoria’s Secret. Bookmark the permalink.

9 Responses to Sex Tourism in Brazil