Posted on November 25, 2010 by Hildete Vodopives

Everybody is wondering how the next president of Brazil,Dilma Rouseff,  will behave. Will she follow Lula’s step or will she implement her own agenda, are questions in the back of our minds. She announced this week the names for ministers of Finance, Central bank and Planning and analysts start to explain what is behind those names. 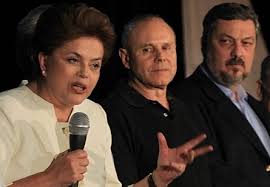 Here’s a brief note on each of them, just in case this becomes the actual lineup. Remember: former FM Palocci and current Planning minister Bernardo have been tipped for close advisory roles to the new president.

– Alexandre Tombini, 47, an Illinois PhD economist, has been almost 20 years in the civil service, initially in trade policy. He joined the CB in 1998, first in Supervision as liaison officer with the BIS and the World Bank. He then moved to Research as division chief, just when the inflation-targeting field program was being rolled out.

He subsequently spent five years at the IMF in Washington, returning to the CB as Director of Special Studies. After a brief stint as Director of International Affairs, he became Director of Regulation, a job he’s held since 2006.

Years at the CB turned Tombini into an experienced policymaker. He’s particularly familiar with prudential rules (bank reserves, leverage rules, capital ratios etc). If he becomes CB governor, we should expect Tombini to resort to interest rates as needed to anchor inflation expectations.

Hildete de Moraes Vodopives is founder of Brazil Global and of the Harvard Strategists Group. She is a fellow researcher of the Centre Roland Mousnier at the Sorbonne University and a member of the Brazilian Investment Analysts Association (APIMEC-Rio), where she served as Corporate Relations Director and later, on the board. Hildete advises companies and investment agencies in international business development.
View all posts by Hildete Vodopives →
This entry was posted in Economy, Politics and tagged Alexandre Tombini, Antonio Palocci, Dilma Rouseff, Guido Mantega, Itau Unibanco, Miriam Belchior, Politics. Bookmark the permalink.