A test for Brazilian democracy

Posted on October 24, 2014 by Hildete Vodopives

Amidst a history full of oligarchies and military coups, Brazilian democracy emerges and give signs of maturity. An exciting presidential race challenges the supremacy of popular party PT, in office after 12 years. But what could be an easy reelection has become a nightmare for Lula and his party. President Dilma Rousseff (PT) is struggling with scandals in oil public company, Petrobras. Her administration is said to be the 3rd worst ever in terms of economic growth in Brazil. GDP is down and inflation is up. 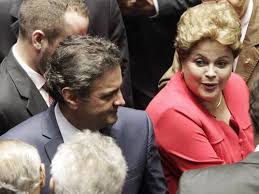 Candidate Aecio Neves (PSDB) made a spectacular turn in the week before the first round. He didn’t wave his elegant and constant attitude when Marina Silva took his place as second in the race. He kept his cool and honored his pedigree as grandson of an icon of the democratization of Brazil, Tancredo Neves.

The PT fights back with ideological catchphrases, opposing capitalism versus socialism, the rich against the poor. The tactics is to associate their opponents and critics with capitalists who think only of their own wealth and don’t care about social programs.

Under president Lula, a declared leftist politician, the liberal macro economic discipline was maintained. Under president Rousseff, things changed significantly as the ideological attitude regained status fueled by the results of social programs.

The confusion of better social levels, corruption and the ideologies revival can be a sign of the pluralism of Brazilian political scene. Or it may also mean a setback to populism. The rise of Aecio Neves is hope that a larger portion of the Brazilian society is immune to those old tricks. If this is true, Brazil will show a mature sense of democracy, way past the paternalist populism that outlives in some South American countries.

Hildete de Moraes Vodopives is founder of Brazil Global and of the Harvard Strategists Group. She is a fellow researcher of the Centre Roland Mousnier at the Sorbonne University and a member of the Brazilian Investment Analysts Association (APIMEC-Rio), where she served as Corporate Relations Director and later, on the board. Hildete advises companies and investment agencies in international business development.
View all posts by Hildete Vodopives →
This entry was posted in Brazil, Economy, Life, Politics and tagged Aecio Neves, Dilma Rousseff, elections, PSDB, PT. Bookmark the permalink.

2 Responses to A test for Brazilian democracy