Posted on January 28, 2011 by Hildete Vodopives 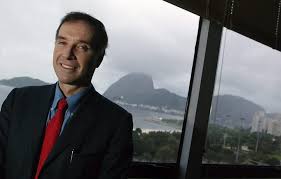 The Rio based EBX Group is planning to strengthen its presence outside Brazil and announced the openning of an office in New York to host EBX International.

According to Eike Batista, chairman of the group: “with the creation of EBX and the International office opening in New York, let’s get even closer to global investors. We are advancing on the international market to identify new business opportunities, with different projects, efficient and attuned to what is best in the world. ”

Mr. Batista is know in Brazil as an audatious entrepreneur not afraid to use his charisma in business. Not at all as most Brazilian business man, generally low profile when it comes to being rich and famous. Eike is not shy about his wealth; being the number one fortune in Brazil and number 8 in the world according to Forbes Magazine. In his personal website one can read about his biography and his ideas on entrepreneurship.

After spending his childhood in Brazil, he moved  with his family to Europe on account of his father’s career.  (Eliezer Batista, himself an international mind and visionary. He was president of mining company Vale and credited large part of its internationalization in the 60ths.)

Back to Brazil in the early 80s, Eike worked in the mineral sector. Fluent in five languages – Portuguese, German, English, French and Spanish – he was an intermediary between producers and buyers in the Amazon in large centers in Brazil and Europe.

The EBX Group’s activities were initiated at the beginning of the 1980s when it commenced the operation of eight gold mines in Brazil, Chile and Canada, as well as three iron ore mines in Brazil.

The EBX Group is investing US$ 15 billion between 2010 and 2012 in sectors such as oil and gas, logistics, energy, mining and the offshore industry in Brazil. The group is comprised of five companies listed on the BOVESPA’s Novo Mercado (New Market), the segment with the highest levels of corporate governance: OGX (oil and gas), MPX (energy), LLX (logistics), MMX (mining) and OSX (offshore industry).

Hildete de Moraes Vodopives is founder of Brazil Global and of the Harvard Strategists Group. She is a fellow researcher of the Centre Roland Mousnier at the Sorbonne University and a member of the Brazilian Investment Analysts Association (APIMEC-Rio), where she served as Corporate Relations Director and later, on the board. Hildete advises companies and investment agencies in international business development.
View all posts by Hildete Vodopives →
This entry was posted in Brazil, Business and tagged EBX, Eike Batista, Logistics, mining, Multinational, New York, Oil. Bookmark the permalink.