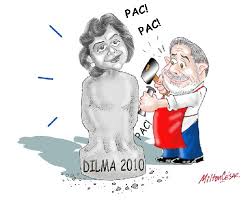 Dilma Rousseff will be the first woman president of the history of Brazil. She won the run-off presidential election against Mr. José Serra, candidate of opposition and former minister of Fernando Henrique Cardoso. The press and financial analysts start to wonder what her administration will be like. Here are my first readings and thoughts.

Analysts expect little change in economic policies and that Lula will have an important influence in Dilma’s governement.

Do what I say, do what I did? Risks to watch

Truth is that Lula’s administration was marked by expansive government spending, political intervention in natural resource industries and corruption scandals. Why should it be different under Dilma, his former chief of staff?

As her predecessor, she will probably keep amplifying the role of state enterprises in industries such as oil, energy and  telecommunications.

Want an example? Marco Vicenzino on the Financial Times today explains:” The historical and unprecedented $67bn flotation of Petrobras should  be used as an instrument for growth and development. Brazil’s new president must avoid politicising the lucrative state-oil giant; above all, it must not be used as a tool to reward cronies at home. The risk of irreversible damage to Brazil’s evolving reputation as a reliable destination for foreign direct investment remains real.”

There are also plans to use state-owned telephone company Telebras to expand broadband Internet access, which could compete with private telecommunications companies.

Fiscal, labor and pension benefits reforms will not be a priority under PT.

Growth of state banks as a political source of influence driving down competitiveness of private banks.

An ambitious primary budget surplus target of 3.3 percent of gross domestic product has been announced but questions remain as if she will risk unpopular budget cuts.