The Economist writes about Facebook going over 500 million users, comparing the social network to states like Brazil, India, China and the United States. Viewed this way, Brazil is still bigger than Twitter, but smaller than Facebook or Myspace. But, why would one really view it this way? Still it may provide food for thought regarding the expansion of social networking in Brazil (Facebook v. Orkut). Elsewhere, The Economist notes that The Big Mac Index shows that Brazilian currency may be overvalued against the dollar. Finally, The Economist has a little piece that argues that the Brazilians make surprisingly good computer hackers.

But many web-watchers do detect country-like features in Facebook. “[It] is a device that allows people to get together and control their own destiny, much like a nation-state,” says David Post, a law professor at Temple University. If that sounds like a flattering description of Facebook’s “groups” (often rallying people with whimsical fads and aversions), then it is worth recalling a classic definition of the modern nation-state. As Benedict Anderson, a political scientist, put it, such polities are “imagined communities” in which each person feels a bond with millions of anonymous fellow-citizens. In centuries past, people looked up to kings or bishops; but in an age of mass literacy and printing in vernacular languages, so Mr Anderson argued, horizontal ties matter more.

The Brazilian real is one of the few emerging-market currencies that is trading well above its Big Mac benchmark. With interest rates high—the policy rate now stands at 10.75%—Brazil has attracted lots of attention from yield-hungry investors. Burgernomics suggests that the real is overvalued by 31%. 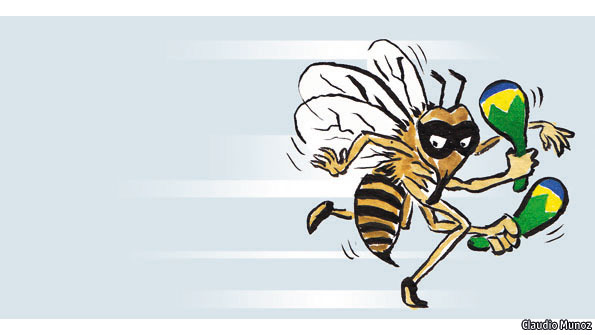 From The Economist on hackers: “In descending order (by number of attacks), the top countries were Ukraine, Russia and America—and with a gap, Brazil. The first three were expected; all have a rich hacking culture. That the Brazilians were ahead of the Europeans and Chinese was a surprise. But Brazil used to be a centre of excellence for the penetration of bank accounts—until banks improved their online security. Samba hackers, it seems, want a new place to show off.”