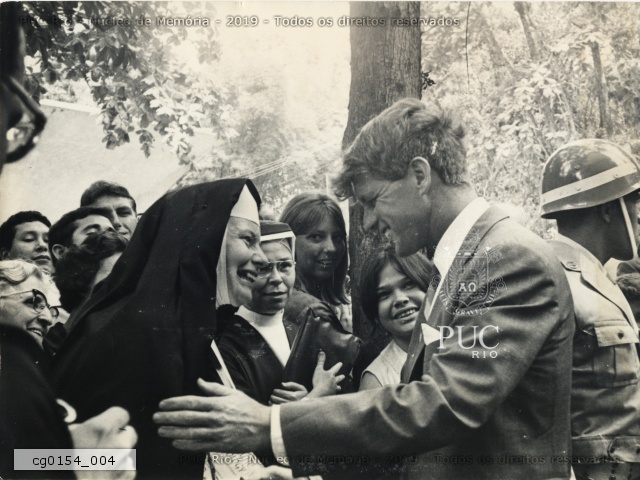 I’ve posted the pictures of Robert (Bob) Kennedy in his appearance at the Catholic Jesuit University (PUC-Rio.Br) of Rio de Janeiro, Brazil. This was suggested to me by a friend and diplomat, Kevin, at the local US Consulate. He also directed me to a useful MOOC, americanenglish.state.gov, which I aspire to use as a platform to teach “Jesuit Entrepreneurship/ Veteran Entrepreneurship (Ignatius, Inacio was a Veteran)” through the global Jesuit schools, educatemagis.org.

Like RFK, I attended Harvard, where I aspired to follow in JFK’s footsteps, as an imperfect man, but as a proud American military member and Veteran. Now as we Americans elect our second Irish Catholic President, it is timely to recall the Kennedy’s who, flawed as they are, are our American Camelot, as the phrase once had it. To all Americans, especially fellow Catholic and Jesuit alumni, I would commend to us a trip to Gavea when in Rio, to visit the bust of John F. Kennedy who at 46 died far too soon, as did his brother, RFK, unfortunately, but not before being honored in Brazil, perhaps our most important ally, after Japan and Germany in this age of Great Power Competition.

I notice that my fellow Harvard graduate, Hildete Vodopives, has taken an interest in greater coordination between American and Brazilian film industries. In this regard, I note that PUC-Rio.br is the location of an important Brazilian film, “Tropa de Elite.” I would welcome opportunities to develop stronger ties between Hollywood and Rio.