FOUR years ago this newspaper put on its cover a picture of the statue of Christ the Redeemer ascending like a rocket from Rio de Janeiro’s Corcovado mountain, under the rubric “Brazil takes off”. The economy, having stabilised under Fernando Henrique Cardoso in the mid-1990s, accelerated under Luiz Inácio Lula da Silva in the early 2000s. It barely stumbled after the Lehman collapse in 2008 and in 2010 grew by 7.5%, its strongest performance in a quarter-century. To add to the magic, Brazil was awarded both next year’s football World Cup and the summer 2016 Olympics. On the strength of all that, Lula persuaded voters in the same year to choose as president his technocratic protégée, Dilma Rousseff.

Since then the country has come back down to earth with a bump. In 2012 the economy grew by 0.9%. Hundreds of thousands took to the streets in June in the biggest protests for a generation, complaining of high living costs, poor public services and the greed and corruption of politicians. Many have now lost faith in the idea that their country was headed for orbit and diagnosed just another voo de galinha (chicken flight), as they dubbed previous short-lived economic spurts. 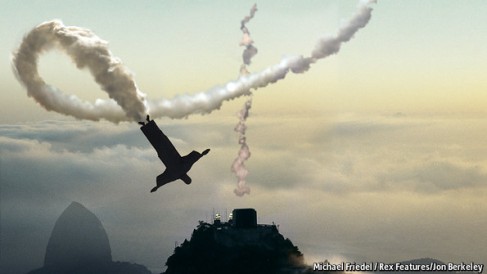 6 thoughts on “The Economist – Has Brazil Blown It?”