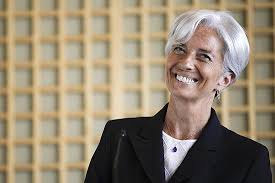 French Finance Minister Christine Lagarde is in Brazil today as part of an effort to broaden support in developing countries for her candidacy to head the International Monetary Fund. Brazil was the first emerging- market country to invite her after she announced her candidacy. She also plans to visit China, India and countries in Africa and the Middle East, she said yesterday.
Christine seeks to fill the vacancy Dominique Strauss-Kahn, who resigned asmanaging director of the Fund after being arrested in New York on charges of sexual assault of a chambermaid.

Lagarde will have lunch with the Brazilian minister of finance, Guido Mantega. Later, she will meet with President of the Central Bank (BC), Alexandre Tombini.

PS. How do you like our blog? Please give us your opinion. It only take 4 seconds to vote.

Hildete de Moraes Vodopives is founder of Brazil Global and of the Harvard Strategists Group. She is a fellow researcher of the Centre Roland Mousnier at the Sorbonne University and a member of the Brazilian Investment Analysts Association (APIMEC-Rio), where she served as Corporate Relations Director and later, on the board. Hildete advises companies and investment agencies in international business development.
View all posts by Hildete Vodopives →
This entry was posted in Politics and tagged France, IMF. Bookmark the permalink.