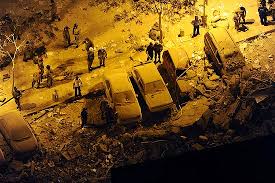 This week 3 buildings collapsed in the heart of Rio de Janeiro. So far, 4 people died. 14 are missing. The tragedy could be much worse if it had not happened at 20:40 in the evening.

But I can’t help thinking that the real tragedy might rest in the frequency that this kind of accidents occur. We need to look beyond the emotion of the moment and search for the causes that turn this events into routine. It is not normal to see a building collapsing every decade. Is it?

Laranjeiras * (1967) on February 21, a storm caused a landslide on a slope at the time of Rua General Glicerio in Laranjeiras (South Zone) hitting a house and two apartment buildings. About 120 people died on the spot.

Viaduct Paulo de Frontin (1971): a stretch of the viaduct under construction fell on November 20th. In total, 28 people were killed and 30 others injured.

Abolition (1988): following the rains that have devastated the river in February, a building collapsed in Tan Oak Street in the neighborhood of Abolition (North Zone), leaving 13 dead.

Morro do Bumba, Niteroi (2010) I could not find the number of dead. This favela from Niteroi collapsed under heavy rain in April 2010. Some newspapers say 100 plus .. 100 missing. (Technically, Niteroi is another municipality but it belongs to the metropolitan region of Rio)

8 thoughts on “Collapse(s) in Rio. A sad tradition”