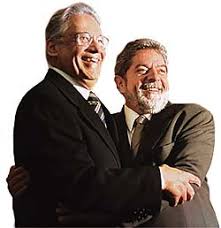 I can disagree with many decisions taken by Lula’s administration. However, I stood up, strong clapped, and even shouted sounds of support, when I saw Lula stepping down from the power democratically. Even though by the end of his second term Lula had approval rates of about 75% (does anyone know how true these widely accepted figures are?), there were no fears that he would try to change the constitution and run for a third mandate. Okay, Lula started to make political campaign for Dilma long before allowed by Brazilian constitution but well…

What made me think about saying THANK YOU LULA were:

1) Someone asked me what I approved the most during his two mandates.

2) I was working in Dakar and next year there will be presidential elections in Senegal.

Senegal’s current president, Mr. Wade, has been in power since 2000 and the constitution states that a president can only have two consecutive mandates. Nonetheless, there are strong indications that Mr. Wade will change the constitution and present himself for a third mandate.

Mr. Wade is officially 85 years old but everyone says he is at least 89. In Africa it used to be normal to get your birth certificate years after being born. Many Senegalese I have met shared their worries that if the old man doesn’t die before elections, he will probably lose it. But, he may not accept his defeat. There is a chance of a catastrophe similar to what is happening in Ivory Coast. Obviously, investors (foreigners or not) consider this risk, as remote as it can be, before investing in Senegal.

Clear economic policy and political stability are pre requisites for any country that seriously consider improving the general wealth of its population. Once again, thank you Lula for contributing to Brazil’s 16 years (it all started with Fernando Henrique Cardoso, Lula’s predecessor) of clear economic policy and political stability. Dilma, I hope to say thank to you in 4 years.

Ricardo was born and raised in Brazil but also has Italian citizenship. He holds a bachelor’s degree in business management from Fairleigh Dickinson University. This erratic blogger is a master candidate in Paris at ESCP-Europe, but presently in a gap semester. He speaks five languages and has worked as project manager for Bolloré Group in Guinea Conakry, West Africa and as agricultural commodities trader for Noble Group in Switzerland, Hong Kong, Argentina, Paraguay, Uruguay and Brazil.
View all posts by Ricardo Geromel →
This entry was posted in Politics and tagged Ivory Coast, Lula, Senegal. Bookmark the permalink.