Last Monday (April 18th), the New York Harvard Club organized a Brazil Summit in a
hotel in Midtown NYC. I was representing ESCP Europe at the United Nations so I couldn’t join it. However, a Forbes journalist made a descriptive article about Mantega’s speech. Guido Mantega is Brazil’s sharp-tongued Finance minister and author of the phrase “currency war”: 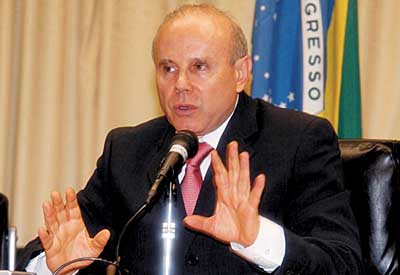 “The Finance Minister’s most interesting points were dedicated to the problem of mounting inflation and real appreciation.  The Brazilian gauge of consumer prices, the IPCA, has already gained 5.9% this year, yet, Mantega told the crowd that it is completely under control.  “We are facing an old foe, inflation, caused by rising commodity and oil prices,” according to Mantega.  Benefitting from massive oil and gas reserves stemming from the recent pre-salt discoveries, and its status as one of the world’s largest agricultural exporters, Brazil is in a “special situation” and it has to “moderate growth to avoid commodity-caused inflation to spread to services and other [high-demand] sectors of the economy.”

Simultaneously, Brazil has to deal with appreciative pressure on its currency as a consequence of dollar debasement.  “Our problem lies with the devaluation of the U.S. dollar, and it won’t change until U.S. policy changes,” explained a defiant Mantega.  The country’s banks had a hard time dealing with “excessive inflows of foreign capital,” as the ultra-loose policies enacted by the Bernanke Fed had a “very strong effect on the value of the dollar.”

“We have to face the currency war without allowing our productive sector to suffer,” noted the man who coined the now famous phrase.  “If we allow liquidity to [freely] enter [the economy], it will bring the Dutch Disease to the economy,” said Mantega, referring to the decline of a nation’s manufacturing sector as the exploitation of natural resources leads to an appreciating currency and a subsequent loss of productivity.  “We will continue to work to avoid losing productivity, protecting our manufacturing base,” he continued, adding that “being competitive doesn’t solve the problem of appreciation, though.”

Ricardo was born and raised in Brazil but also has Italian citizenship. He holds a bachelor’s degree in business management from Fairleigh Dickinson University. This erratic blogger is a master candidate in Paris at ESCP-Europe, but presently in a gap semester. He speaks five languages and has worked as project manager for Bolloré Group in Guinea Conakry, West Africa and as agricultural commodities trader for Noble Group in Switzerland, Hong Kong, Argentina, Paraguay, Uruguay and Brazil.
View all posts by Ricardo Geromel →
This entry was posted in Brazil and tagged ESCP, Guido Mantega, Harvard Club, United Nations, United States. Bookmark the permalink.

1 Response to Brazil Summit in NYC